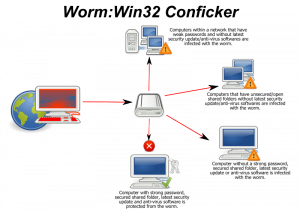 And the joke will be on whom? It is not a good joke, actually. In fact, if it indeed happens, it will be one of the worst jokes in cyber security. The Conficker worm has been the subject of many discussions and the target of many security experts’ attention; and rightly so. This worm has infected millions and millions of machines worldwide and has proved to be a headache.

Now, the rumor is that on April’s Fools Day of this year, the third version of the worm will be activated. Those behind the worm designed the first two versions to spread like wildfire. According to experts, those two versions are nothing compared to the third one, 32.Downadup.C, which is supposed to “solidify its position.”

The good news is that the first two versions of the Conficker worm have been thoroughly scrutinized and reverse engineered by security experts. These activities have given them an understanding of how the worm works. The bad news is that the creators of the virus know this, and they will definitely work on creating a “better” version this time around.