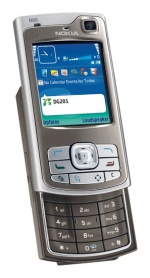 Several companies are attempting to apply Voice over Internet Protocol (VoIP) to mobile phones. T-mobile announced that they are going to launch mobile wi-fi cellular hybrids by the end of the year. Once these phones detect a Wi-fi connection they will automatically switch to the Wi-fi and connect calls through VoIP without interruptions.

Companies used VoIP technology to make calls are increasing, cutting down the cost of long-distance calls, but so far it’s been limited to office or home use. Cellular phone companies like Nokia have launched the N80 Internet Edition, their latest products with mobile phone-based VoIP. The road to this conversion has not been smooth, however. Last month major VoIP company Skype announced that there will be delays for their plans to expand their services to mobile phones due to technical difficulties and the lack of compatible handsets. But it’s certainly only a matter of time before users get a wide variety of VoIP-related services on their mobiles.

VoIP may end up being cheaper than conventional mobile calls, but the same security concerns that plague VoIP will apply to this developing technology. There are still encryption issues for the data packets sent over the Internet, and the possibility of having calls eavesdropped or even rerouted by attackers. The worst posssiblity would be a denial of service (DoS) attack that can degrade call quality or completely crash the end service. So far there has been no clear-cut solutions to these problems, and users must be aware that these security issues exist.